Britain was the name made popular by the Romans when they came to the British islands. 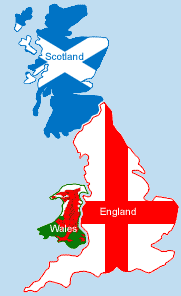 Where is Great Britain? Great Britain is an island lying off the western coast of Europe, comprising the main territory of the United Kingdom.

What is Great Britain?  Great Britain is the official name given to the two kingdoms of England and Scotland, and the principality of Wales.

Great Britain is very often, but incorrectly, used as a synonym for the sovereign state properly known as the United Kingdom of Great Britain and Northern Ireland or the UK for short.

If you look at the full name of the UK, you will see that the UK includes Great Britain AND Northern Ireland.

England used to be known as Engla land, meaning the land of the Angles, people from continental Germany, who began to invade Britain in the late 5th century, along with the Saxons and Jute.

The term Great Britain was first used during the reign of King James I of England (James VI of Scotland) in 1603, to refer to the separate kingdoms of England and Scotland. on the same landmass, that were ruled over by the same monarch. Despite having the same monarch, both kingdoms kept their own parliaments.

United Kingdom (The uniting of kingdoms)

The ‘United Kingdom of Great Britain’ was formed in 1707 by the Act of Union that created a single kingdom with a single Parliament. (Scotland has always retained its own legal system)

A hundred years later the Act of Union of 1801 joined Ireland to ‘Great Britain’ and the name “United Kingdom of Great Britain and Ireland” was first used. (Since 1921 only Northern Ireland has been part of the United Kingdom and so the name changed).

By Welcome2Britain in Uncategorized on July 29, 2013.
← Experience the majesty of England’s most famed and beautiful castle’s Stonehenge Private Vieweing Tours. Go beyond the fences and into the inner circle →