Her Majesty and the Duke of Edinburgh arrived at the main sorting office in Windsor, after making the short journey from Windsor Castle, to begin the first official engagement of her birthday week. 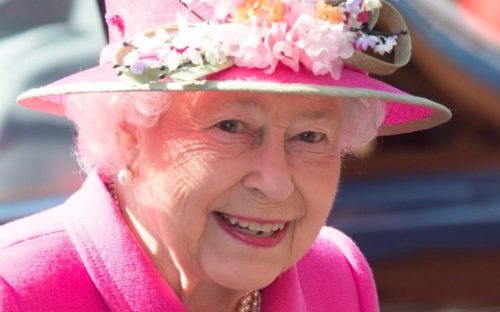 The Queen arrives at the Royal Mail in Windsor CREDIT: GEOFF PUGH FOR THE TELEGRAPH

The Queen, whose birthday is on Thursday, was greeted by a cheering crowd of hundreds of invited guests who had gathered in the car park to wish her an early Happy Birthday.

One of the biggest events will be The Queen’s 90th Birthday Celebration, in the private grounds of Windsor Castle (12 – 15 May); the town of Windsor is reached in 30 minutes by train from London. Queen Elizabeth II’s 90 years will be celebrated in 90 minutes of music, dance, song and equestrianism, involving more than 1,500 participants and 900 horses.

Fashioning a Reign: 90 Years of Style from The Queen’s Wardrobe will celebrate the Queen’s reign through three exhibitions of more than 150 of her outfits. The exhibitions will be staged at Her Majesty’s official residences, with each collection carefully selected for its particular association with the place. ThePalace of Holyroodhouse in Edinburgh will highlight the use of tartan in royal dress (21 April – October). London’s Buckingham Palace will cover fashions from the 1920s to the 2010s with outfits representing the Queen’s childhood, wedding, coronation, royal tours and state visits (August – September), while Windsor Castle will contrast the Queen’s magnificent evening gowns with the fancy dress costumes she wore for wartime family pantomimes (September 2016 – January 2017). www.royalcollection.org.uk

The Queen’s official birthday weekend in June will be another highlight. As usual, the Queen will attend a service of Thanksgiving at London’s St Paul’s Cathedral (10 June), and the traditional Trooping the Colour ceremony will be on 11 June. To get your hands on tickets (£30) for Trooping the Colour, apply in writing in February. Alternatively, there are two rehearsal events – The Major General’s Review (free; 28 May) and The Colonel’s Review (£10; 4 June) – or you can join the flag-waving crowds lining the procession’s route from Buckingham Palace along The Mall and Horseguards.www.householddivision.org.uk/trooping-the-colour

The climax of the office birthday weekend will be a host of classic British street parties across the country on 12 June. The biggest one, and the first of its kind, The Patron’s Lunch, will be on The Mall in London. Most of the 10,000 tickets for this have already been allocated, but the remaining tickets will be made available by public ballot in March (£150; www.thepatronslunch.com). Otherwise, pack a picnic and head to one of thelive sites in Green Park and St James’s Park and watch proceedings from big screens. Expect a festival atmosphere!

In Edinburgh, The Royal Yacht Britannia will throw two parties fit for a queen. On 21 April and 12 June there will be complimentary birthday cake, Britannia fizz and music from the Musical Mariners on board the yacht, which was, according to the Queen, “the one place I could truly relax”. www.royalyachtbritannia.co.uk

The Queen has attended RHS Chelsea Flower Show in London more than 50 times since 1949 so it’s no surprise that the show is planning something special to mark this occasion (24 -28 May). A photo exhibition will portray the Queen’s many visits to Chelsea, and a floral archway built to commemorate the Queen’s birthday will be one of the first things the Queen sees when she arrives at the show. www.rhs.org.uk

There will be plenty of celebrations in the equestrian world too. As well as jumping, dressage and endurance events, the Royal Windsor Horse Show (11 – 15 May 2016) will be a chance for visitors without tickets for the 90th Celebration to see some of the acts; it will be in the same venue as The Queen’s 90th Birthday Celebration (from £16; www.rwhs.co.uk). Windsor Racecourse will hold HRH Queen Elizabeth’s 90th Birthday Racenight on 16 May, with music after the racing (from £9). www.windsor-racecourse.co.uk

By Welcome2Britain in The Queen's 90th Birthday Celebration, Uncategorized on April 20, 2016.
← Bill Bryson on Great Britain St George’s Day: What does it mean and why do we celebrate the patron Saint of England? →