St George’s Day: What does it mean and why do we celebrate the patron Saint of England?

St. George’s Day takes place on April 23rd every year, recognising the patron saint of England apparently made famous for slaying a dragon and saving a distressed maiden 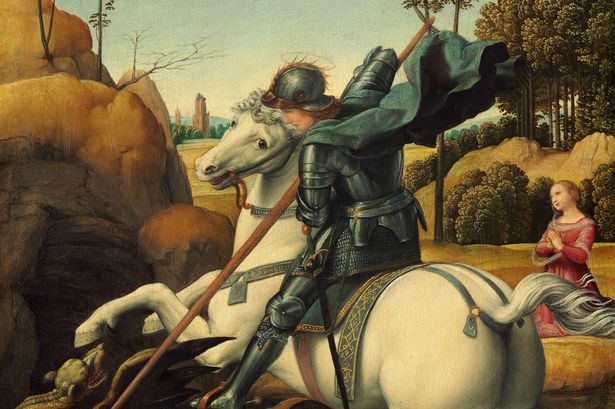 It’s the one day of the year, apart from major football tournaments, when you are guaranteed to see English flags being waved proudly across the country.

April 23 is a national day of celebration about all things English.

But St George’s Day isn’t honoured as widely as those of other patron saints – St Patrick being a notable example.

Very little is known about St George, his annual feast, or why we celebrate him.

Here are all the facts you need to know about England’s national day.

St George’s Day is celebrated on April 23 every year.

It is honoured by various Christian churches and by the several nations, kingdoms, countries, and cities of which St George is the patron saint.

St George’s Day was named as early as 1222 – but only one in five people in England actually know what day it’s on.

In 1415 St George’s Day became a national feast day and holiday in England. But after the union with Scotland in the 18th century it ceased to become a national holiday.

Now most people only mark the day with a flag.

Historically people would wear a rose on their chests. Roses became a symbol of the patron saint because a beautiful bloom is thought to have grown on his grave. This also came from a tradition in Catalonia in Spain – of which St George is also a patron saint – where women would give men a book and receive a rose in return on the feast day.

William Shakespeare is thought to have been born and died on the same date as St George, so you can celebrate with games and acting workshops at the Globe Theatre as well as traditional hog roasts and medieval-themed frolicking.

Who was St George?

The patron saint of England has become famous from stories that he slayed a dragon and saved a distressed maiden.

But actually very little is known about his life that is not myth and legend.

He is believed to have been born in Palestine in the 3rd Century AD to Christian parents and is also the patron saint of many other places around the world.

St George is thought to have first lived in Lydda, near modern day Tel Aviv.

He was a soldier in the Roman Army like his father and quickly rose up the ranks. He was later tortured and a number of medieval tales detail the awful punishments he was said to have endured – including being boiled and crushed between spiked wheels – because he refused to give up his Christian faith.

He was executed on the 23rd April 303 AD for refusing to stop being a Christian when asked by Emperor Diocletian – who had begun a campaign against Christians.

St George is believed to have been dragged through the streets of Lydda in Palestine and then beheaded for refusing to renounce his faith.

His life and suffering also inspired medals for valour and bravery.

The George Cross is the highest such award that a civilian can earn and is awarded for extraordinary bravery and courage in the face of extreme danger. The George Medal is second behind it.

Other things St George is the patron saint of include farmers and other agricultural workers, butchers, horses, horseriders and saddlemakers, and also soldiers.

He was also later made patron saint of Scouting because of his ideals.

And, unfortunately he has also become known as the patron saint of a number of diseases including herpes, leprosy, skin diseases and syphilis. Some legends state this is due to him helping others.

Why is he patron saint of England?

St George represents traditional English chivalry and bravery, but he was not actually English at all.

In fact, he never even set foot on British shores.

The heroic story of St George became popular in 1483, when it was published in a book called The Golden Legend.

The decision to make him patron saint was made by King Edward III when he formed the Order of the Garter in St George’s name in 1350. The badge of the order depicts George slaying a dragon.

April 23, supposedly the date of his death in 303 AD, was adopted in the early 13th Century, as the date of the annual celebration.

The cult of the St George was further advanced by Henry V at the battle of Agincourt.

Before the armies clashed, Shakespeare had the immortal phrase: “Cry God for Harry, England and St. George.”

Many believed they had seen the saint fighting for the English – further cementing his place in history. In 1415 St George became the official patron saint of England.

England’s flag is the emblem that Saint George famously wore on his shield or banner.

Richard the Lionheart adopted it in the 12th century, and soldiers wore the Red Cross to distinguish themselves from the enemy in battle.

Did he really slay a dragon?

In a word, no. It’s easy to forget, but dragons don’t actually exist.

The legend tells of a single well in the village of Silene, guarded by the ferocious beast. Villagers had been giving it sheep to stop it attacking people, and then started sacrificing humans.

St George arrived just as a princess was about to be offered and like a true hero saved her in the nick of time, according to the Golden Legend. The King is then said to have set up a church of Our Lady and St George.

Medieval chronicler Jacobus de Voragine compiled similarly bizarre stories about other saints in his book Golden Legend and is entirely to blame for his association with the story.

The book was something of a bestseller.

Read the full story in The Mirror Online

Join us on a small group guided tour and discover the real England.
The Small Group Tour Experts
http://www.Welcome2Britain.com

Curry, the O2 and Banksy – the very best of England: Tourism chiefs have come up with a roster of 101 ‘must-do’ activities

See Naples and die, goes the saying, such was the Italian city’s erstwhile fame for beauty and magnificence. Taking inspiration from such sentiments, tourism bosses in England have produced a “bucket list” of 101 things to do and see before you expire – or worse, holiday abroad.

The full list, to be revealed on Tuesday to mark St George’s Day, features staple favourites such as visits to Stonehenge, the Tower of London and Buckingham Palace. But it also contains some more unusual suggestions, such as rampaging around in the treetops of Sherwood Forest or going on a bat patrol.

Here The Independent on Sunday looks at 10 of the most surprising “must-dos” and 10 of thosedeemed too eccentric to make the list:

Start the day with a full English breakfast in London’s East End, at E Pellicci, an Italian café in Bethnal Green that’s been in the same family since it opened in 1900.

Visit John Rylands Library at the University of Manchester and see 15th-century accounts of witchcraft, the oldest piece of the New Testament, and a first edition of Shakespeare’s sonnets.

Walk across the top of the O2 in Greenwich, London. The venue is 52 metres high with a diameter of 365 metres, and people can arrange to go on the top of the dome.

Go in search of damsels and dragons – the insect variety – by visiting Wicken Fen nature reserve in Cambridgeshire, home to thousands of types of plants, otters, water voles, dragonflies and birds.

Mix martinis in James Bond’s spiritual home – Dukes Hotel in St James’s Place, London – and follow in the footsteps of the Bond author Ian Fleming, who used to drink there.

Curry is a “national treasure”, according to Visit England, who recommend visiting the Sparkhill, Balsall Heath and Moseley areas of Birmingham – Britain’s curry capital.

Have a night on the toon in Newcastle – a city with some of the “friendliest folk you’ll ever meet” say tourism bosses. Not to mention a “cool yet unpretentious arts scene”.

Take to the treetops in Sherwood Pines, Nottingham, where you can charge around almost 10 metres above the ground, and go down a 140m-long zip line between the trees.

Trawl the back streets of Bristol in search of Banksy graffiti. Stokes Croft is home to the artist’s Mild Mild West mural, and some of his earliest works can be found in Easton.

Join a bat patrol at Cheddar Gorge, Somerset. With the help of an ultra-sonic bat detector, you can wander around Gough’s Cave and Cox’s Cave – home to endangered greater horseshoe bats.

The list of 101 things to do was whittled down from more than a thousand nominations. Here are 10 of the more unusual ones which didn’t make the cut.

The world gravy wrestling championships – an annual highlight in the village of Stacksteads, Lancashire; a gnome reserve in Bradworthy, Devon, home to more than 2,000 gnomes. Europe’s smallest cinema – Screen 22 in Nottingham; Barter Books, Alnwick, where the “Keep Calm & Carry On” poster was re-discovered; Thrust SSC – the world’s fastest car – at Coventry Transport Museum; the SkyWalk at Blackpool Tower; Chester Clock; “glamping”; Ryde Pier (the oldest in the world); the spire at the Church of St James in Dry Doddington, which leans one degree more than the Tower of Pisa; a stay in a gipsy caravan; donkey rides in Scarborough; a speed boat ride along the Thames; Affleck’s, Manchester; the National Space Centre, Leicester; and the view from The Shard in London.